Skies of Arcadia Wiki
Register
Don't have an account?
Sign In
Advertisement
in: Rewrite Requested, Characters, Playable Characters,
and 4 more

It has been requested that this page or section be rewritten.

Aika has apricot skin, brown eyes and orange hair which she ties into two long, stiff braids. During the brief moments when she lets her hair down, it is shown to be soft and straight. Aika's clothes consist of a pair of red goggles which she wears perched on top of her head, blue pendant earrings (identical in shape to Fina's), a pendant of a face (resembling Destra) around her neck, a sleeveless yellow dress, an oversized blue belt with a silver buckle, dark shorts (which bear a passing resemblance to Japanese school bloomers) and a pair of yellow boots similar to Vyse's. She also wears a large yellow leather glove on her left hand, which is her boomerang hand (which implies that she's left-handed), a blue wristband on her right wrist and a blue "utility" pouch on the back side of her belt. She also wears a brown armband on her left arm. Her physical beauty has attracted unwanted advances from Admiral Vigoro of the Valuan Armada. Aika is 17 years old, the same age as Vyse and Fina.

Aika's childhood alternated between happiness and tragedy. Her parents were killed when she was a small girl, and for a time she was kept by the Dyne family as a foster daughter until she was old enough to take care of herself, when she moved back into her family's old home. When she was a very young girl, Aika fell into the well on Pirate Island and was rescued by Vyse; as a result of the trauma of this fall she has never learned to swim. When she was ten years old, she got into serious danger while helping out with a rescue mission, and this situation resulted in the crescent-shaped scar under Vyse's left eye. Aika feels guilty about Vyse's injury, but Vyse doesn't blame her for it.

Aika has been friends with Vyse for her entire life and the two fight well together. She also becomes fast friends with Fina. Aika has problems with authority figures, including Captain Dyne, but comes into her own when she, Vyse, and Fina strike out on their mission. Although Aika shows signs of feeling more than friendship with Vyse, such as showing extreme worry when they're separated and kissing him on the cheek during a night time conversation on Crescent Isle, she never makes it more explicit, likely due to realising the gleaming romance between him and Fina.

Aika's fighting style is aggressive, using her boomerangs in long arcing curves against single opponents. Her magic is very strong, though not quite as strong as Fina's, and she has an especial affinity for spells of the Red Moon, which she learns more quickly than others. She is also the quickest character with the most agility, letting her unleash her attacks and magic before opponents have much of a chance to retaliate. Noticeably, all of Aika's S-moves are named after letters of the Greek alphabet. Her S-Moves involve wide attacks against groups of foes, especially powerful against weaker enemies, and are powered by the Red Moon, making them fire based.

Aika makes a cameo appearance in the PlayStation 3 game Valkyria Chronicles as an optional playable character (along with Vyse and Fina). She is voiced by Grey DeLisle in the English version.

In the game, she is named Aika Thompson and is a Scout in Squad 7. Uniform and weapons aside, she looks identical to her Skies of Arcadia counterpart, albeit a bit older. Other references to her Skies of Arcadia counterpart include quotes such as "If you die on me, then I'm taking all your treasure!" and "I ain't scared of the dark! ...just ghosts...".

Unlike Vyse and Fina, Aika never appeared in the anime adaptation.

Aika seen with Piastol in a flashback.

Aika can be seen with her hair down in a hidden scene early on in the game; after meeting with Dyne and reaching the surface of Pirate's Isle, Aika will briefly return home to "freshen up", by interacting with the handkerchief on the left side of her home, Vyse can spy on her.

Aika with her hair down.

Aika's flag for the Delphinus. 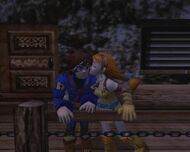