He is only able to be defeated the third and final time you face him, at the top of the tower of Soltis. Presumably because Ramirez is now mentally unhinged from losing Galcian, he's vulnerable to all techniques. Ramirez is fought in three forms, one right after the other. In the first, he duels Vyse's party hand-to-hand using the techniques he learned as the Silver Civilization's strongest warrior. In the second, he allows himself to fuse with the Silver Gigas, which expands to the size of a city and forces a midair confrontation with Vyse's Delphinus. This second defeat breaks through the Gigas's outer shell and exposes the core, a half-Gigas, half-Ramirez entity. When this form is defeated on the deck of the Delphinus itself, Ramirez and the Gigas are both destroyed, leaving behind Ramirez's own Silver Moon Crystal, and the game concludes in a new, post-Ramirez era of peace.

This move's animation lasts a whopping 30 seconds to fully unfold. However, it should be noted that many super moves last just as long, but this move may feel notoriously long because of how often Ramirez uses it across multiple battles.

This move's animation lasts 28 seconds, but feels far shorter than Silver Eclipse's animation possibly due to how more frequently the latter is used.

Relevance to the Black Moon[]

Concept artwork of a younger Fina and Ramirez 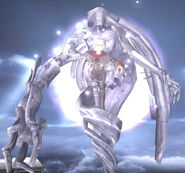