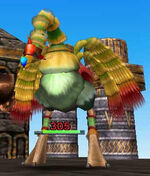 Rik'talish is the eighth boss in the game and is the boss of Rixis. It resembles a large multi-colored bird-like creature with a long neck and is a green element enemy with 6913 HP.

Rik'talish can use the following abilities: