Skies of Arcadia Wiki
Register
Don't have an account?
Sign In
Advertisement
in: Article stubs, Discoveries, Locations,
and 2 more

Edit
watch 01:36
We're Getting Mutants in the MCU - The Loop
Do you like this video?
Play Sound

The Temple of Pyrynn (ピュラミス神殿, pyuramisu shinden?) is an ancient temple located on the primary continental island of the Nasr kingdom. It is a large pyramid on the northern edge of the desert, near the mountain chain. Within, a system of seals utilizing rolling stones, water, and lava bar entry to the shrine of the Red Moon Crystal. This pyramid is also is the resting place of the Gigas Recumen, whose heads form the four large statues outside the temple. These statues abruptly reveal their true nature when awakened by the Red Moon Crystal used by Admiral Belleza. After Recumen is dealt with, the grounds of the Temple are left as a large hollow crater in the absence of the rather large body of the Red Gigas, although the temple itself remains unharmed.

It is at the north end of the major Nasr Desert, just southeast through the stone reef from the entrance of the Southern Dannel Strait. If the player follows the stone reef almost directly north of Maramba, they should find it with no trouble. This is one of the Discoveries that must be found to complete the storyline of the game, and is automatically found if the player did not discover it before Drachma ditched the party at Maramba. If the discovery is made before the party reaches Maramba Drachma gruffly bars the player from landing instructing them to go to Maramba first, but the discovery is still logged.

The Temple itself is a Dungeon the party must complete in order to advance the storyline. 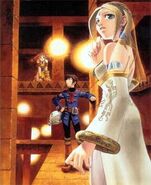 Official art of Fina, Vyse, and Aika inside the temple.

This article is a stub. You can help Skies of Arcadia Wiki by expanding it.