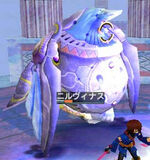 Veltarn is the boss of Glacia. It resembles a robotic creature and is a purple element enemy with 10,801 HP.

Veltarn can use the following abilities:

When defeated, Veltarn yields 3,357 EXP, 6,491 gold, and a Crystalen Box. Defeating it also allows access to the room where Vyse and crew will be reunited with an old friend.

This article is a stub. You can help Skies of Arcadia Wiki by expanding it.